I wrote this article at the end of February 2020, set for release in early March, but Covid-19 shut everything down.

I was hoping to release this with more photos and videos “in use,” but for now, you’ll just have to take my word for it that these projectors work well. I will post more photos to this post if people share them with me.

Unlike stickers, light cannot be ripped down. In 2017, I purchased five “Chauvet EZ Gobo” projectors.  At the moment they are about ~$200 a piece, but if you order them in a case from a distributor, they should be able to get the cost per unit below ~$150. (I paid $143).

I chose these projectors because they have a strong magnetic base, built-in battery, and the 10W LED is low power enough (low heat) to allow for gobos to be printed on transparency paper with almost any printer. For a single message, or image, these are much more power efficient than a comparable video projector.

They are not waterproof, but you can put a plastic wrap around it and seal it up for almost any weather.  They have a loop on the back so they can be locked up and a remote to turn them on and off from a distance.

Other brighter <$200 gobo projectors are widely available.  Some of which will work exactly the same, but this is the only one that I am aware of that has a built in battery.   I reached out to Chauvet multiple times over the years, but they offered me little in terms of support.

You can install these in store fronts and put them on timers, so they power on at night.  To do this, open up the case and remove the battery so that the projector powers on when plugged in.

If you don’t need a portable / battery powered/ gobo projector. I would recommend finding a similar one that plugs into AC power.  It is easy to remove the battery, but I doubt the manufacturer would want you doing it.

I’ve made a quick video going over most of the projector and my process.  Additional benefits to printing your own gobos on transparency paper is that you can use highlighters and markers to color the projections.

If you are good at stenciling, you can make your own gobo’s by hand with transparency paper.  My B&W Laser printer causes a thermal “smudging” that looks “textured.” A sharpie can easily fix this, but I don’t mind, the messages are simple and clear. 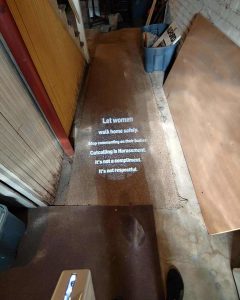 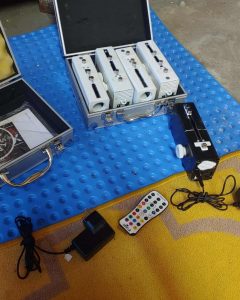 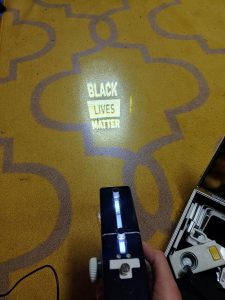 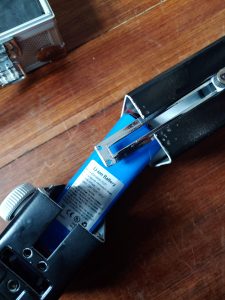 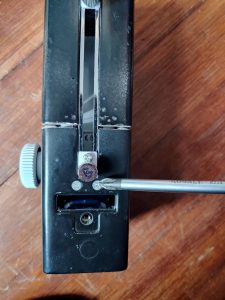 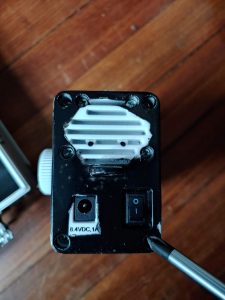 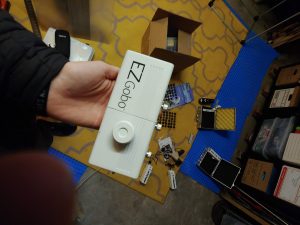 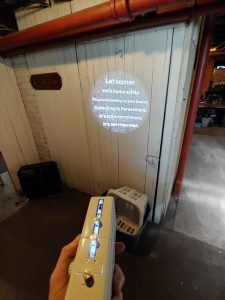 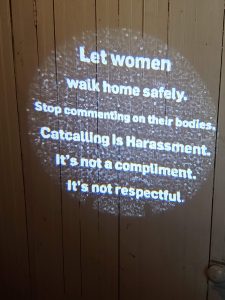 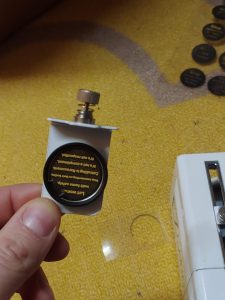 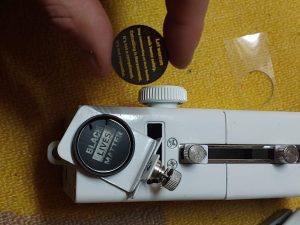 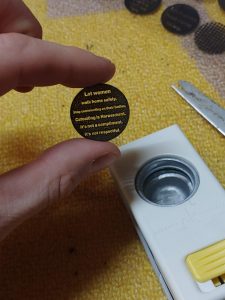 This cutter does a decent job. 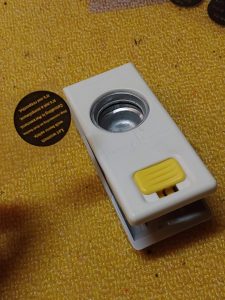 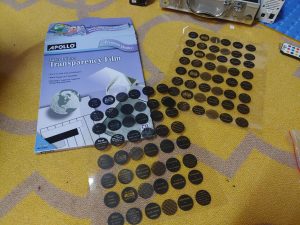 Hopefully, I can demo how to use these for other forms of art and projection mapping, but for now, I wanted to make this post to get the word out.

How large of an image have you been able to project using this method and from what distances? Thanks

Hi Albert. I would say a 30ft x 30ft image is the max size I would project from 30 ft away. That being said. You can project images a good distance away if the ambient light is low. If you need it for a powerful light situation (city streets), you can buy or build a more powerful gobo. Few are battery powered. If you can be more specific, I can try to help further.

Thanks for the PSD files

Hi! I’m looking for a powerful projector that would work well at night in a downtown setting with competing city lights. Rain proof would be preferable. Any ideas?

I don’t have any in particular, but you’ll want a high powered outdoor projector, such as https://www.gobosource.com/gos/gobosource-spot-c25e-exterior-gobo-projector-p-3568.html

If you can find a local distributor, they can help sort out an order.

Let me know if you have anymore questions.

VJ software, such as VDMX, has a number of FX that can be applied to layers in real time. In this tutorial, I'll demonstrate a way to integrate Snap Camera's Lenses into your next performance.

Never Enough – The Struggles of Cice

Mockumentary: An activist documentarian embarks on her most passionate project yet! To document a middle-aged rapper and his idiotic team.